What Happens If You Cut Down Lilies Too Early? 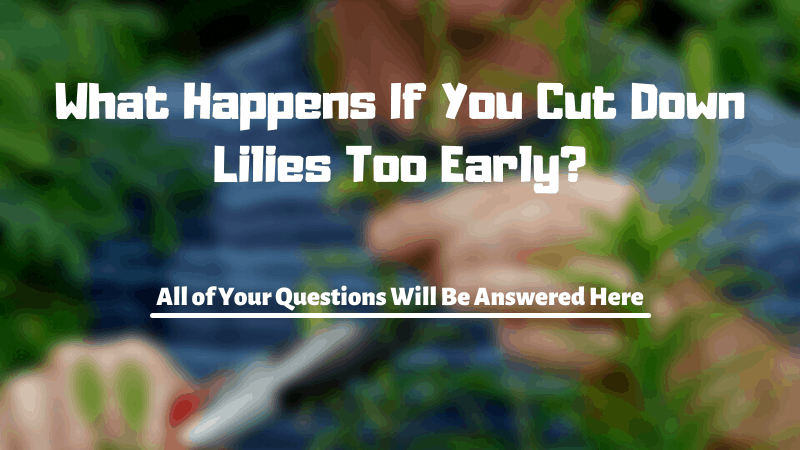 Every action has its own proper time. In either case, too much or too little may cause severe damage. The same goes for cutting lilies too.

Do you know what happens if you cut down lilies too early?

Lilies come in different species and varieties. Most of them grow either grow partial sunlight or direct sunlight. Choices and circumstances are involved whether you should cut down lilies or not. It might be tempting to cut down the foliage of your lilies after they have finished flowering, but this actually does‌ ‌more‌ ‌harm‌ ‌than‌ ‌good.

To know more about How Do You Get Daylilies To Bloom All Summer? check our latest article.

What Happens If You Cut Down Lilies Too Early?

The foliage of your lily should be left after the flowers have faded. ‌When pruning your lilies to make the garden look more elegant, you risk weakening them. In order for the roots to receive nutrition, the lily’s leaves photosynthesize. ‌Roots are strengthened this way to survive the cold winter and return to growth‌ ‌the‌ ‌following‌ ‌year.

Lilies can’t survive without their foliage. Roots will become weaker, plants will become less vigorous, and flowers will be poor ‌the‌ ‌following‌ ‌summer. Wait to cut lily stems until the leaves start to brown or until‌ ‌the‌ first‌ ‌frost.

The leaves of your daylily ought to be left alone, but as soon as the flowers fade, you need to cut off the flower stalk. The plant will start to produce seeds when you leave the stalk. As a result, your lilies may not bloom well due to a lack of energy and nutrition.

According to the University of Vermont Extension, it is best to leave 3 to 4 inches of the stem while cutting down the flower stalk. Pests and diseases can be spread by cutting down too close to the ground.

During any season, you can trim your lily’s damaged or diseased leaves. Leave leaves that display no signs of disease on the lower 3 to 4 inches. Cut the whole leaf if an infection has spread to the entire leaf.

It is optimal to divide and transplant lilies during the fall, right after the flowers fade. The foliage should be cut back to between six and eight inches before the move. Keeping enough foliage leaves the roots with sufficient energy while allowing the plant to grow.

Until the foliage dies back, leave the foliage surrounding the transplanted plant. Lilies‌ ‌survive in the winter by absorbing nutrients from the foliage, which remains after the flowers fade.

When Can I Cut My Lilies?

The right time of cutting lilies depends on several things:

It is advisable to remove faded lily flowers as soon as possible. If left untended, blooms will produce seeds. Flowers and plants will not grow properly as a result.

Cut or pinch the flowers off to remove them. You can also cut the stalks and arrange them in floral arrangements when the blossoms first open.

How To Cut Lilies?

Even if the plant is still blooming, you can still deadhead any lilies that appear wilted or brown. You can encourage new growth by removing dead flowers from your lily, depending on the variety.

Make your way to the base of the plant by following the flower stalk. A stalk of lilies carries one or more flowers at the end.

The stalk of the lily must be followed all the way to the base to “deadhead” it. Plants may not have enough visibility to see into the center. You can follow the stalk with your hand if you cannot see it.

Plants’ stalks should be cut off at the base. If you wish to remove the flower, all you need to do is cut it off at the end of the stalk instead of pinching it off just behind the bud.

Use pruning shears to cut the stalk at the base of the plant. Approach the base as closely as possible. A stub should never be left behind.

Until fall, leaves with yellowing or browning should be left on the plant. Don’t touch the yellow foliage, which has not still turned brown.  You don’t have to worry about yellow stalks adversely affecting your plant’s health. A reduction in their energy production is actually caused when they are cut down early.

Identify all brown leaves on the stems and remove them. The entire stem should be removed if several of the leaves on one stem are brown.

To reach the base of the lily plant, follow the stem, and then the whole stem should be cut off with pruning shears. Ensure that there are no stubs left‌ ‌at‌ ‌the‌ ‌base‌ ‌of‌ ‌the‌ ‌plant.

Tip-off browning leaves with a cutting tool. Unless the entire stem is browning, you do not need to remove your lily plant if just the tips of the leaves are brown. Instead, a browning tip clip should be angled to the left below this. Following this process will help you to grow green, healthy plants for lilies.

To know about mowing over daylilies, check our latest article.

What Caution Should I Maintain During Cutting Lilies?

When Can I Lift The Lily Bulbs And Replant Them?

The bulbs can be gently dug up and divided if necessary after the blooms have faded in fall. It is your choice where to replant. However, it is a good idea to add some compost or other fertilizer to the same area where you are planting.

Will Lilies Bloom After Being Cut?

The leaves of lilies function as nutrients for the next season’s flowers, similar to tulips and daffodils. There is no harm in cutting individual blossoms. However, don’t cut more than half or two-thirds of the lily stem. If not, they will face problems returning‌ ‌to‌ ‌‌bloom‌‌ ‌in the‌ upcoming ‌summer.

How To Grow Lilies In Your House?

There is nothing better than a garden filled with lilies. Their blooming period does not require cutting as much as other plants.

Don’t cut them down until they’ve bloomed —pruning is typically done after the first frost. You should remove entire stems of dying blooms when cutting them.

Take note of how much damage has been done when you notice dying foliage. Only those parts of the leaves that are browning should be cut down.

So, what happens if you cut down lilies too early? Hopefully, you got your answer to this query. We are pretty sure you now know everything about cutting down lilies. You should neither cut them too early nor too late. Cutting lilies at the right time will ensure a healthy blooming. Happy gardening!