Why Do Lilies Smell Stronger At Night? Everything You Need To Know 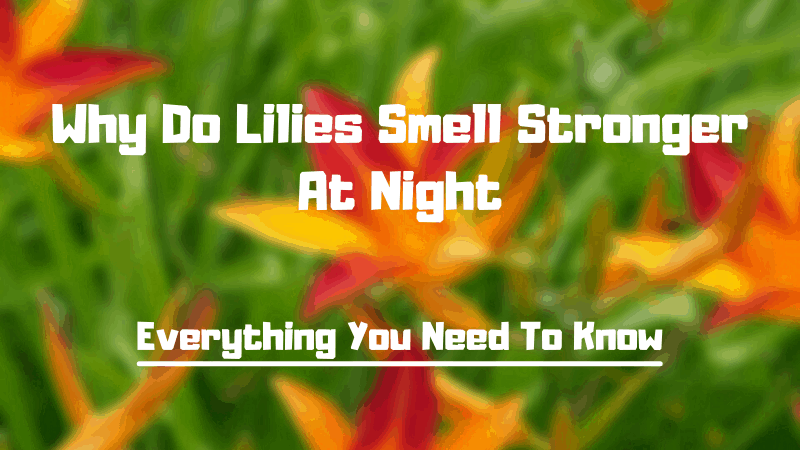 Lilies are revered for their innocence and freshness, making them the symbol of rebirth and new life. They symbolise purity. That’s why Christina Rossetti said,

Faith is like a lily, lifted high and white.

Now the question is, why do lilies smell stronger at night?

Lilies smell stronger at night because during the reproduction of lilies, pollen (male component) has to get inside the pistol (female component). Usually, it happens in the nighttime, and as an immediate response, the fragrance been released.

Why Do Lilies Smell Stronger At Night?

Like other flowers, pollination of lilies is most often done‌ ‌by‌ ‌insects. Pollinators of some plants that attract insects at night are nocturnal insects. During the pollination process, insects, birds, and the wind move pollen from one flower to another.

Most lilies either attract pollinators through their scents or colors. There is a perfect time for night-flying insects for pollination when the pollinators are most active. The nighttime smell of lilies is more intense to continue the pollination smoothly.

Every single lily flower makes a unique scent. Flowers of the same kind have a sense that they are very close to each other but not exactly alike.

The reason for this is simple. The sense they make attracts different kinds of insects that will help them pollinate and reproduce.

So, why a lily does that? Lilies have a male part called the stamen with a sticky powder called “pollen.”

Besides their male parts, they have a female component‌ ‌called‌ ‌the‌ ‌pistil. For a lily to reproduce, pollen has to get inside the pistol.

When it does, seeds are made in a part of the flower called the oval. Night-flying insects are like to eat the pollen in the center of flowers.

They also take some back to the high for their young. Their hairy legs grab some pollen when they get closed to lilies.  And the bee takes it to another flower nearby.

The pollen falls off into the new flower, and voila. Now that the pollen from the first flower has reached the second flower, it can create seeds.

Why Lilies Don’t Smell So Good In The Daytime?

Each flower releases its scent at a different time. Flowers often open during the evening or at night, based on the lily type.

Flowers are either most fragrant at night or in the daytime. As the pollination of lilies occurs at night, they don’t smell so good in the daylight.

In other words, as the insects that pollinate plants are most active at night, it is around this time that plants emit the most fragrance.

Can The Smell Of Lilies Make You Feel ill?

It is no doubt lilies have an attractive and sweet fragrance. However, when the smell becomes too strong, it may affect us. Though not all types of lilies will make you feel ill, some lilies can do it. They are —

What Problem Can You Face due to The Strong Lilies Smell?

Several health issues may occur to you if you stay too close to lilies for a long time. Children are more prone to become sick than adults from strong smell lilies. More importantly, cats are more vulnerable to lilies’ smell. There are several types of illness you may face due to the strong lilies smell. They are—

Why Do Some Flowers Release Their Smell At Night?

Some flowers release their smell at night because their primary goal to lure many night-flying insects.

Due to their inability to be seen by the nightlight, they require much more attention and give off a strong smell.

What Is The Smell Of Lily Flower?

Lilies do not have many competitors when it comes to their fragrances. An exquisite and lovely perfume accompanied by a stunning display of flowers makes this combination a masterpiece.

The blooming season of Asiatic Hybrid Lilies mainly occurs during the summer season. Though they are hassle-free and straightforward to grow, most of them usually don’t have any fragrance. 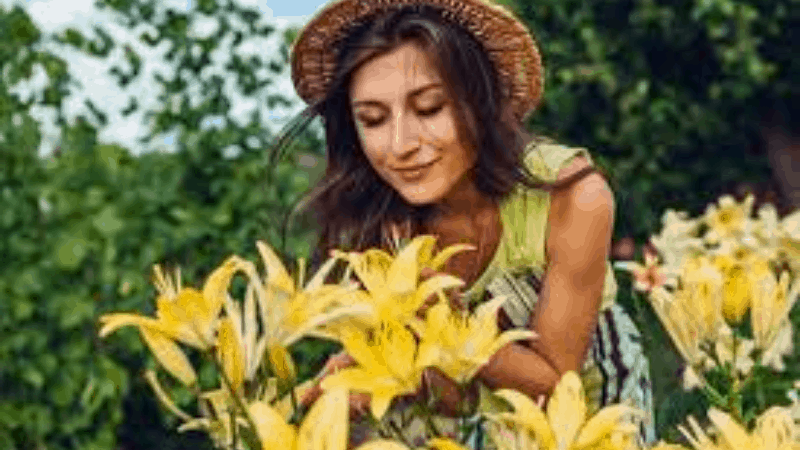 The scent of other varieties of lilies is delectable and pleasant. On the other hand, you will also find some lilies which have a strong or overpowering smell. People who are sensitive to fragrances may not be able to deal with them properly.

Although Lilies are always gorgeous when cut, they can have some shockingly bad scents when‌ ‌they‌ ‌exhale. For this reason, you shouldn’t plant lilies, especially hard-smelling lilies, inside your house. If you do, make sure to choose only that type of lilies, which have merely any scent.

Contains a pleasing fragrance, Lilium longiflorum or Lilium japonicum alexandrianae is a good choice. These two flowers have delicate scents, making them perfect for a household.

The fragrance of all lilies is not the same. However, the scent of hybrid lilies can range from mild to intense. It has been possible to hybridize and interbreed several different species of lilies to create colorful and fragrant blooms.

Here we are mentioning some lily flowers and how are their smells.

How Do You Stop Lilies Smelling?

A method for controlling the lily’s scent is to remove its stamen. So, it is not only the scent of lilies that can make people love it. In order to stop Easter lilies from smelling, all you need is a pair of tweezers and five minutes.

Take several newspaper sheets and unfold them. Over a clean and flat surface, spread the newspapers. Put three pages of newspaper on top of each other. The lilies should be kept in the mid-part of the newspaper surface.

Step 2 – Place In The Center of The Flower

With one hand, grasp the stem and the stamen of the flower while petal stalks facing forward in the middle. Then, use your other hand to grab a pair of‌ ‌tweezers and place it into the center of the flower.

Take the stamen at its base and pinch it, so it goes deep inside ‌the‌ ‌bloom. Then, break off the stamen by pinching them together with your tweezers.

With tweezers, remove the stamen from‌ ‌the‌ middle point ‌of‌ ‌the‌ ‌flower. Next, take a paper napkin and place a stamen on it. Continue removing the stamens from all ‌remaining‌ ‌lily‌ ‌blossoms.

Keep the lilies separately and turn the newspaper over so that it faces toward the center. Toss the newspapers into the trash after crumpling them into a ball.

If you plan to showcase the already cut flowers, fill a container with fresh water. Or, if they are uncut, keep them in a moist, soil-filled container.

How to Keep Your Flowers from Giving a Bad Smell

When you grow lilies on a pot or container, you need to change the water from time to time. It will ensure no bacterial build-up while keeping the lilies free from bad smells.

While changing the lilies’ water, don’t forget to prune the stems too. Some cells of stems die when a long period of time is spent dipping them in water. Hence, it is a better idea to prune the lilies stems regularly to ensure the proper growth of plants.

Don’t keep flowers next to fruits or vegetables

Clean up Vases or Containers thoroughly

A soapy water solution or dishwasher can be used to clean the container and ensure the flowers are kept in an environment free of bacteria. In addition to extending their lifespan, it also eliminates their smell.

Are you still wondering about this question, “Why do lilies smell stronger at night?” You most probably got to answer about this matter. Thanks for reading!